Bids are being considered by American Bird Conservancy (ABC) for the mechanical treatment of up to 160 acres (151 acres delineated) of 1-4” brush in the designated project areas on tribal lands managed by Red Lake Band of Chippewa Department of Natural Resources (Red Lake DNR). 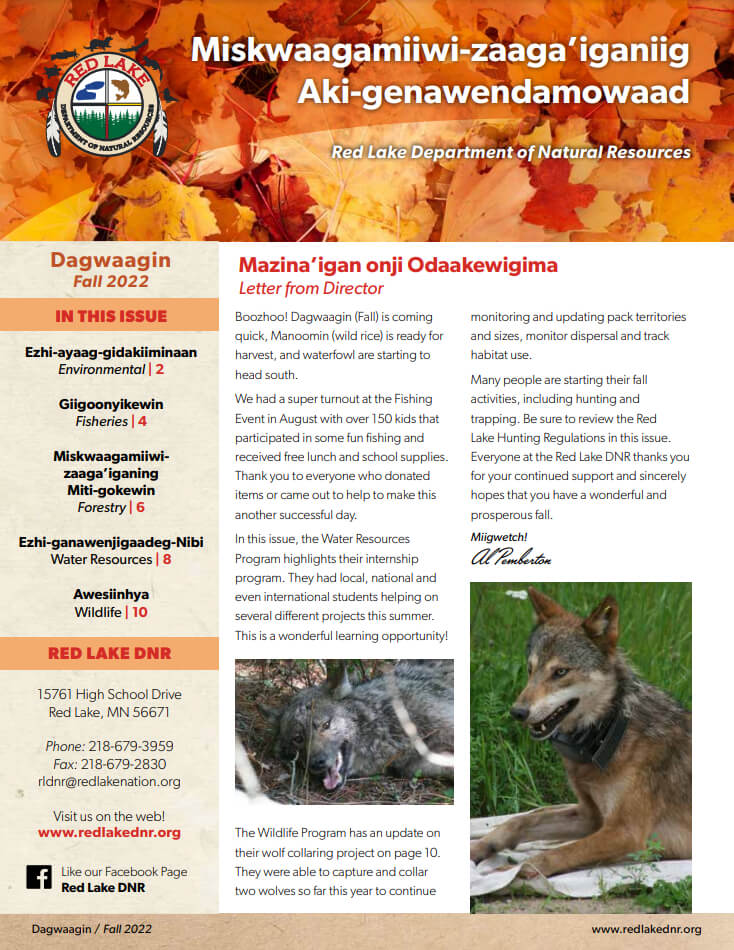 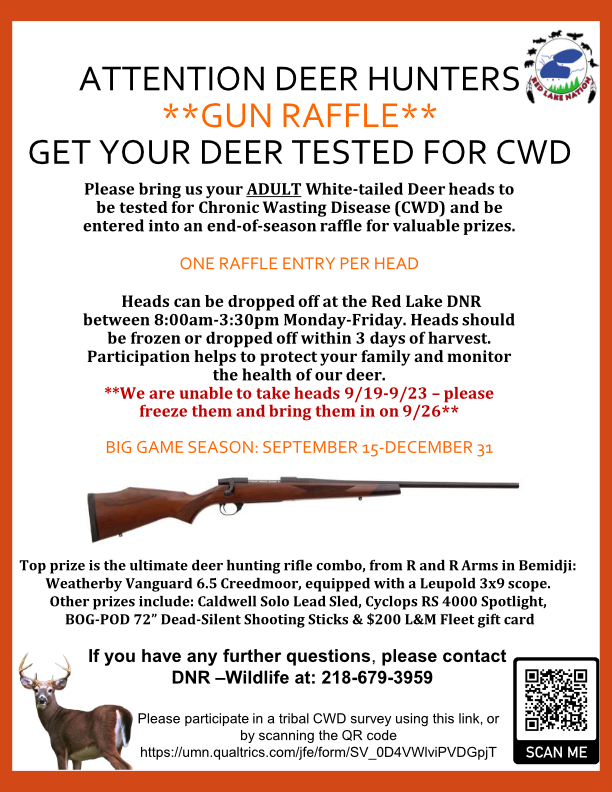 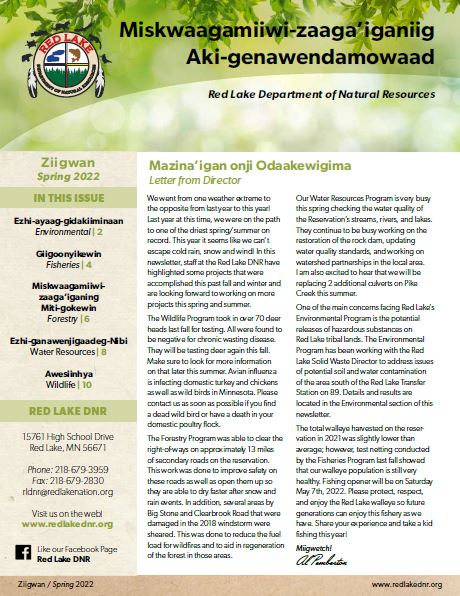 WHAT TO KNOW ABOUT AVIAN INFLUENZA (BIRD FLU)

Avian influenza, also known as bird flu, is an infection caused by the Avian Influenza Type A virus. Wild aquatic birds such as gulls, terns, shorebirds, ducks, geese and swans are all considered natural carriers (hosts) of avian influenza. These hosts can transmit the virus to domestic poultry (chickens, turkeys, etc.) through direct exposure with infected birds. Avian influenza can be deadly to domestic poultry.

Avian influenza does not normally infect humans; however, human infections have occurred. Human infections happen by exposure to the virus through direct contact with infected birds or infected surfaces. The best prevention is to avoid contact with wild birds or domestic poultry that look sick or have died. Infections range from no symptoms or very mild symptoms to severe infections and even death (very rare, but possible). Signs of bird flu in humans are eye redness and mild upper respiratory flu-like symptoms including fever, cough, sore throat, runny or stuffed nose, muscle or body aches, headaches, fatigue and shortness of breath. Testing is required to determine if someone is infected with bird flu. No human infections have been detected in the United States so far in 2022. Avian influenza does not present a food safety risk. Poultry and eggs are safe to eat when handled and cooked properly.

In the past month, highly pathogenic avian influenza has been confirmed in commercial flocks of chickens and turkeys in Iowa, South Dakota, Nebraska, Wisconsin, and Michigan as well as several other states. If you find a dead wild aquatic bird or have a death in your domestic poultry flock, please contact the Red Lake DNR as soon as possible.

Bids are being considered by American Bird Conservancy (ABC) for the mechanical treatment of up to 343 acres (323 acres delineated) of 1-4” brush species in the designated project areas on Tribal lands managed by Red Lake Band of Chippewa Department of Natural Resources (Red Lake DNR).

Bids are also being considered by American Bird Conservancy (ABC) for the mechanical treatment of up to 175 acres (165 acres delineated) of 1-4” brush in the designated project areas on Tribal lands managed by Red Lake Band of Chippewa Department of Natural Resources (Red Lake DNR).

Your input will be used to determine which air quality issues are of most concern within the Red Lake Reservation communities, and ultimately it will help shape the Red Lake DNR’s Air Program. 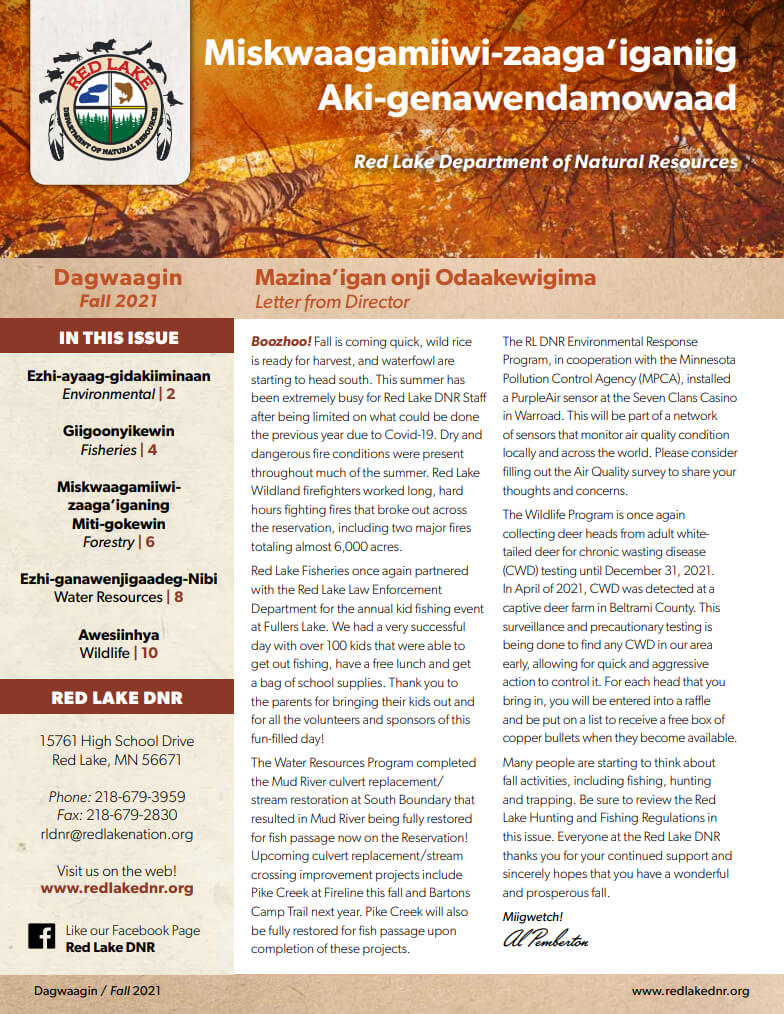 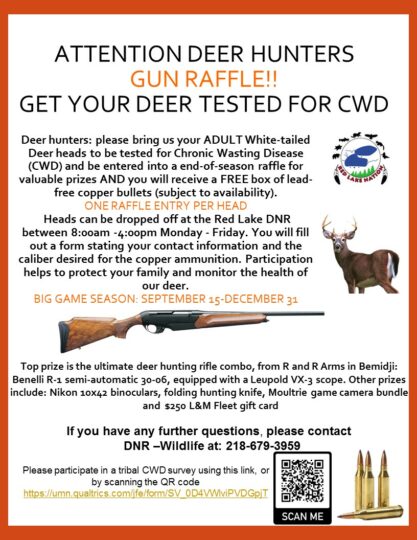 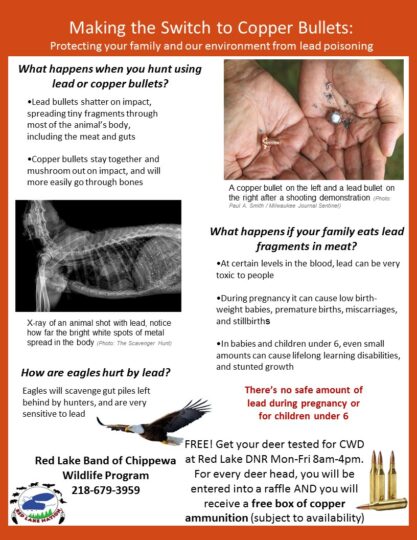 Gun Raffle – Get your deer tested for CWD

Join us for our 2021 Red Lane DNR Forestry/Water Resources/Wildlife Auction.  We have 17 items up for sealed bidding.  Download the Bid Form and printable Advertisement flyers below.
Auction Bid Form (PDF)
Auction Advertisement (PDF)

6 Years in Partnership with the Minnesota Pollution Control Agency

The Red Lake DNR Water Resources Program has spent 6 years in partnership with the Minnesota Pollution Control Agency and local partners developing strategies to restore and protect waters that impact the Reservation in the Upper/Lower Red Lake Watershed.
We have worked to collect water quality data, assess the conditions of waters both on and off the Reservation, and to develop strategies to improve any identified water quality issues. As a rural headwaters watershed, there are relatively few items of concern. However, as we have identified in the Watershed Restoration and Protection Strategy (WRAPS), protection of these high quality waters is of utmost importance to the tribe.
Learn More

Bears are coming out of their dens and will be hungry. The new compactors at the transfer stations have removed a source of food for some bears. Bears may be more active around homes and communities until natural foods are available.

Some precautions you can take:

Please Contact Red Lake Conservation at 679-3313 with any questions or concerns. 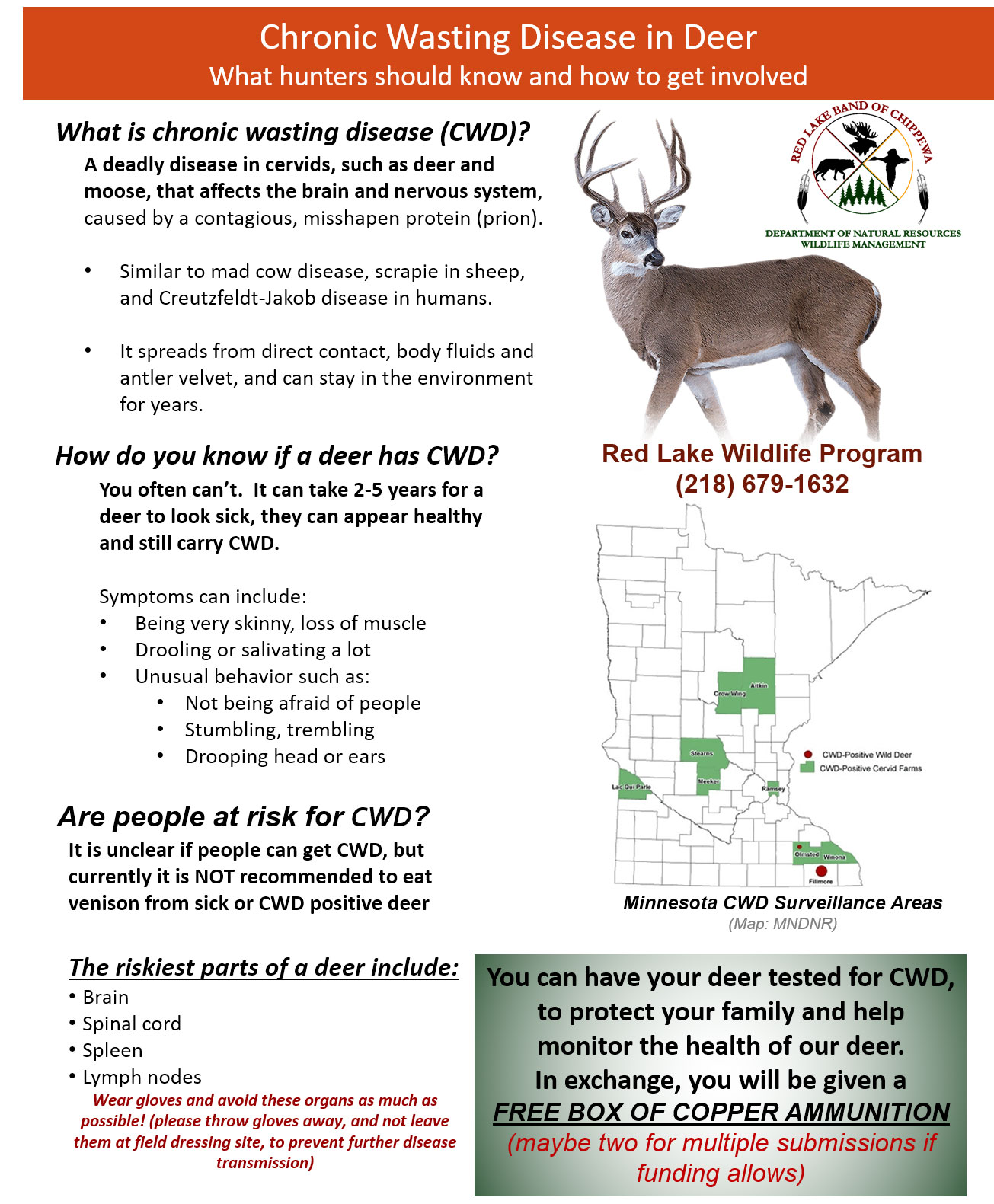 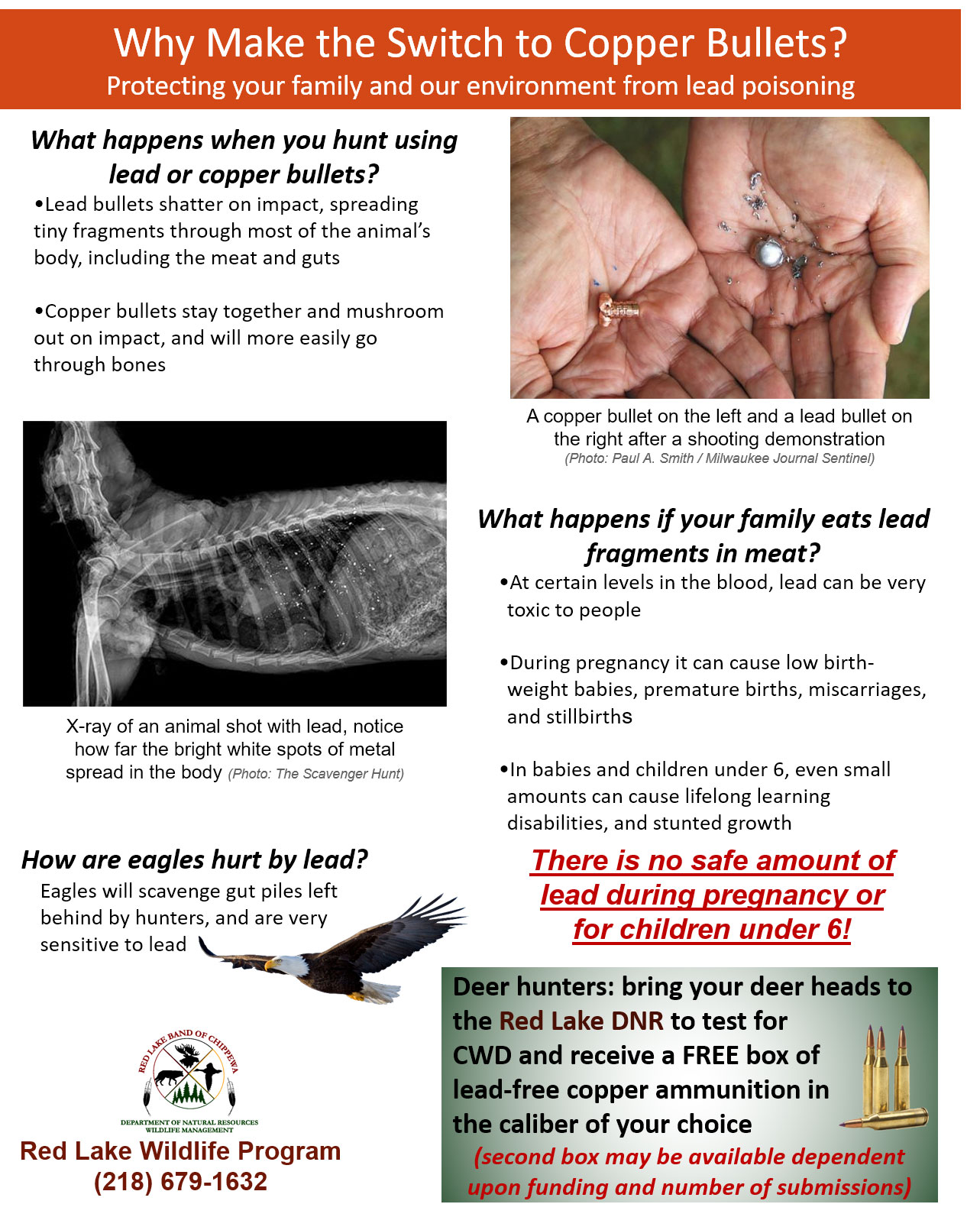 To minimize the risk of COVID-19 exposure to our Firefighters, the Red Lake DNR is restricting all open burning on the Red Lake Reservation. All existing burning permits will be suspended and no new permits will be issued until further notice. Prescribed burning projects will continue to be implemented by the Fire Program and managed by trained firefighting staff, to mitigate the potential for larger and more dangerous wildfire. Please contact the Red Lake Wildland Fire Center for further information (679 – 3381).

Storm damage assessments performed in 2018 by Red Lake DNR Forestry and Fuels personnel identified several project areas around the southern portions of the Diminished Reservation. The treatment involves shearing all remaining standing broken and wind-thrown trees within the project area and then piling. Managing these fuels will minimize the chance for severe wildfire outbreaks. This technique also creates conditions suitable for the stand to naturally regenerate as soon as possible.

As of February 19, 2020, shearing has been completed on some of the storm damaged project areas east of Redby (see map). There is an abundance of available firewood in these piles within the sheared areas. This firewood is free to the public. Access at this time is very good as the snow was removed during the shearing process. Questions can be directed to the Red Lake DNR at 679-3959. 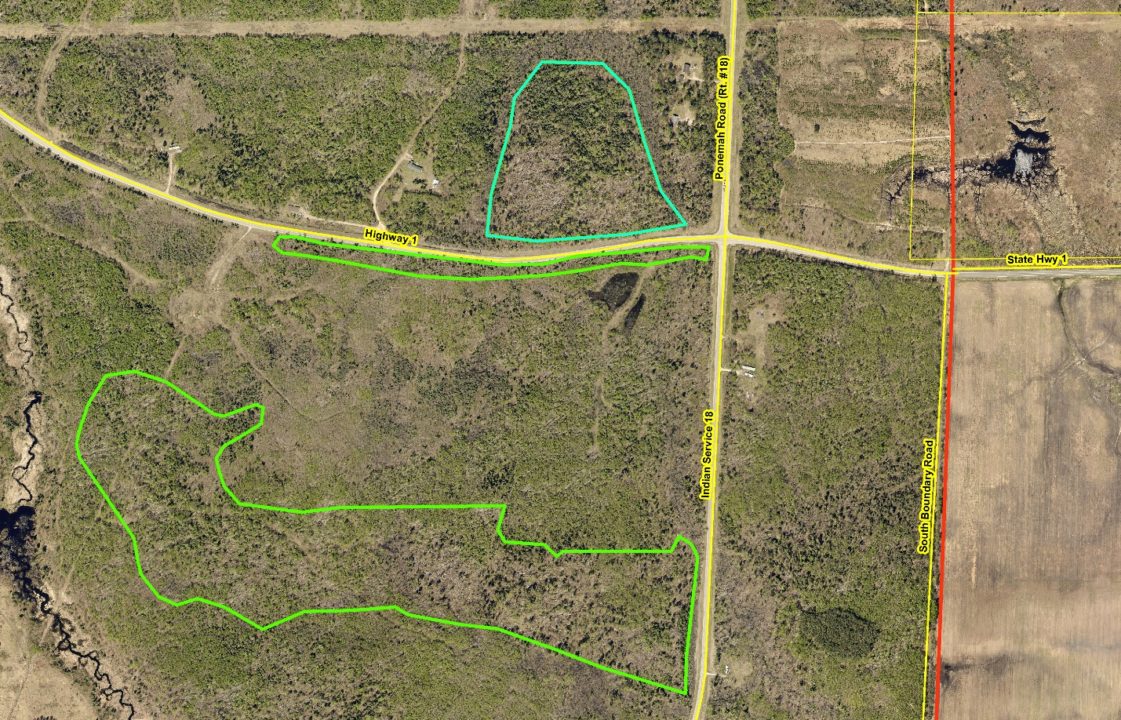 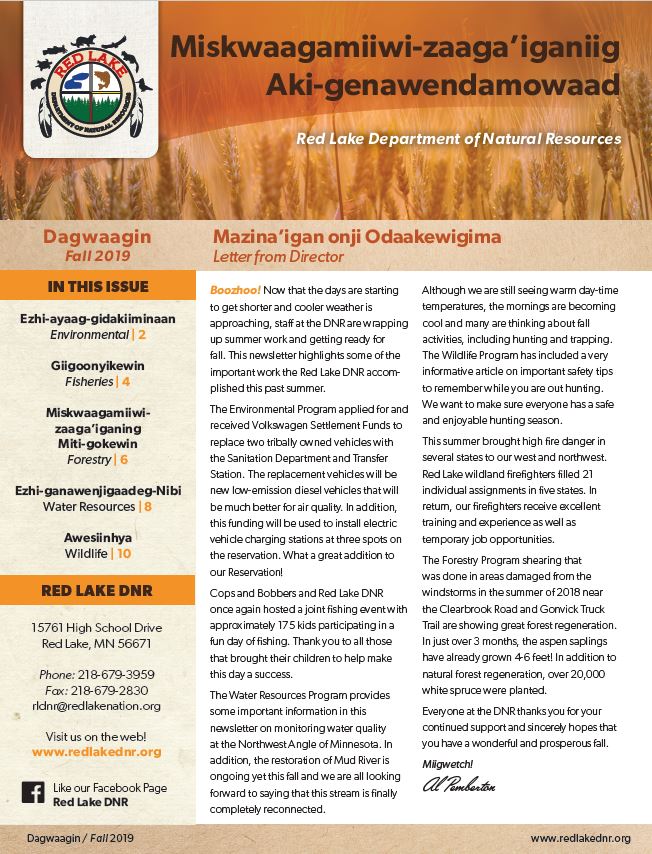 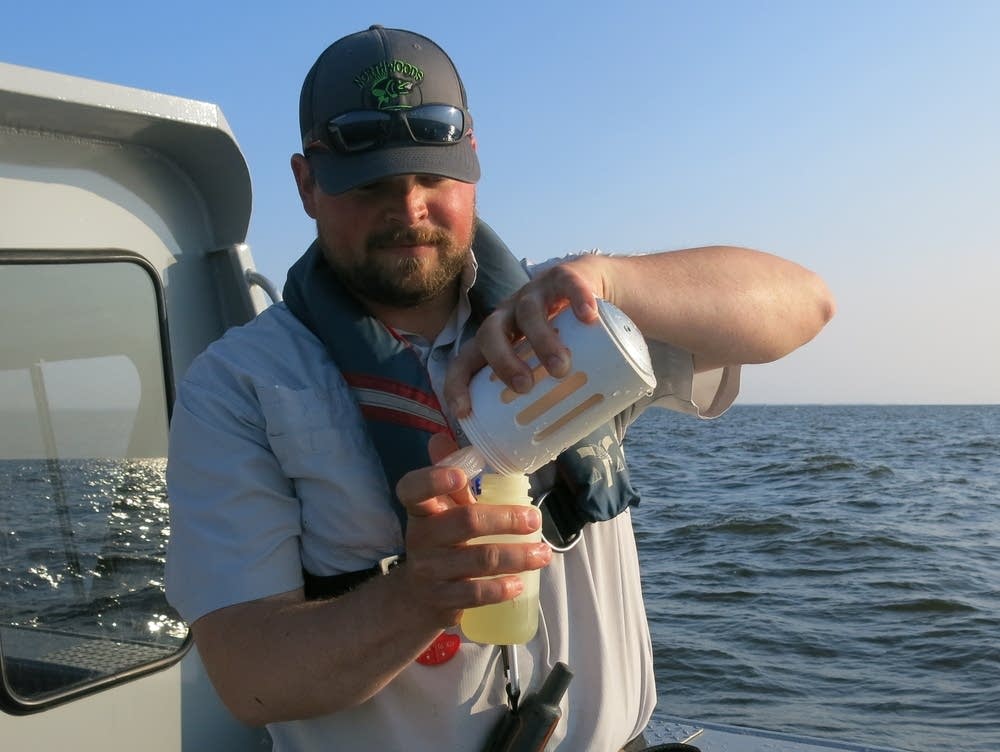 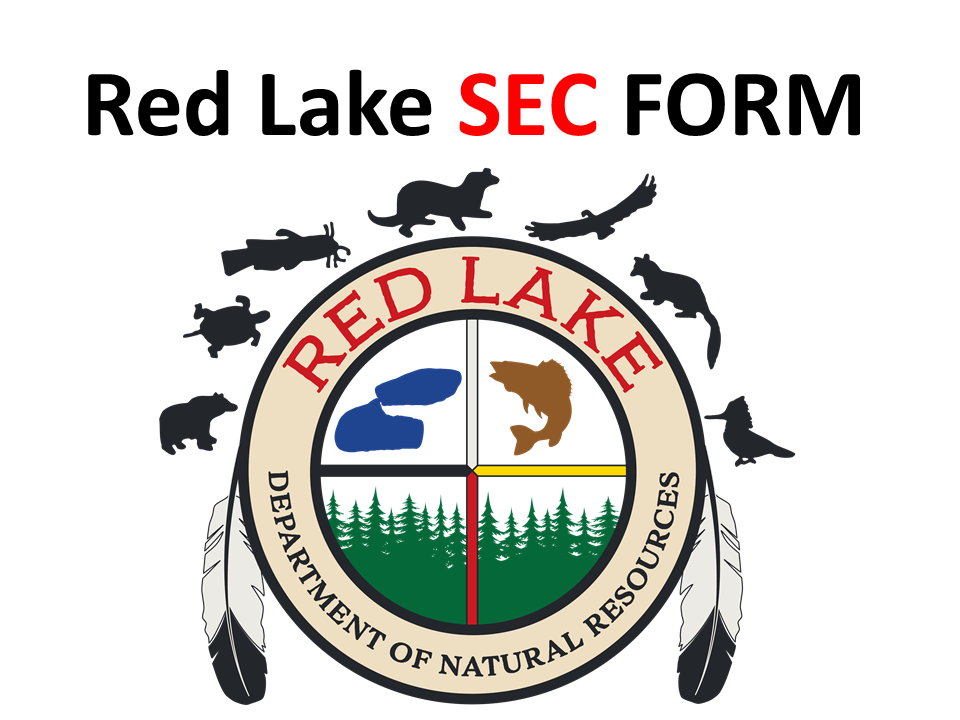 The Red Lake Reservation is home to 75 percent of the Tribe’s 10,000 Band members. The primary sources of livelihood include hunting, fishing, and subsistence natural resource harvesting. Natural resources historically represented the most important source of employment to the Band members, with commercial fishing and logging representing the two most important industries. These two industries affect every member on the Reservation. Therefore, preserving and restoring its rich aquatic ecosystem and abundance of other natural resources is critical to Band members’ health, welfare, traditional ways of life, economic viability, and is a high priority for the Band.

Natural resources programs for the Reservation have been productively operating since the 1980’s. Base programs such as forestry, fisheries, wildlife, waters, and environmental protection have created a strong foundation allowing expansions in recent years to create specialized programs such as wetlands, GIS, air quality, and fire prevention to name a few.