The Fisheries program was started in 1987 and is responsible for the management and conservation of reservation fish stocks on 237,000 acres of Upper and Lower Red Lake, 135 smaller lakes, and approximately 55 miles of rivers and streams. The fisheries resource on the reservation is diverse, ranging from small cold water trout lakes, small largemouth bass-bluegill lakes, to the large walleye-yellow perch fishery of the Red Lakes. Staff includes one biologist and 3 full time technicians. The program has a fish hatchery with the potential of raising 10 million walleye fry annually and a small re-circulating aquaculture unit which was used to grow yellow perch in the past. This unit may be retrofitted in 2016 to raise fish coupled with aquaponics unit. 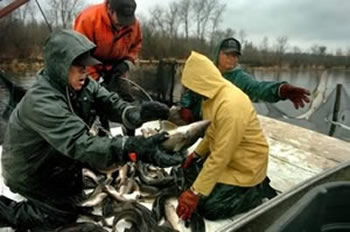 The main focus of the assessment program is to monitor the harvest and health of the fish stocks of the Red Lakes. The Red Lake Reservation is home of the oldest and largest walleye commercial fishery in the United States which started in 1917. The Walleye stocks collapsed in the late 1990’s and the commercial fisheries voluntarily suspended the fishing season in 1997 to assist in recovery of the walleye. A joint walleye restoration effort was launched between the Red Lake Band, the State of Minnesota, and Bureau of Indian Affairs which brought a group of technical experts together to recover the walleye stocks. This committee formulated a plan, which was accepted by the Red Lake Band and the State of Minnesota, to recover the walleye and this plan was extremely successful. By 2006, the walleye had rebounded to sustainable numbers and the harvest of walleye was authorized again by both governments. This successful multi-agency recovery effort has received numerous awards and national media attention. Today, the lake remains health, and annual safe harvest of walleye on the reservation is estimated to be over a million pounds.

The smaller lakes on the reservation are surveyed and managed to provide recreational opportunities for tribal members, and also non-tribal members who have purchased tribal fishing licenses. The smaller lakes are stocked cooperatively with the U. S. Fish and Wildlife Service to provide some unique opportunities on the reservation including brook trout, rainbow trout and lake trout fishing.  The tribe received a grant through the U.S Fish and Wildlife Service in 2006 to re-introduce lake sturgeon, which was last reported in the Red Lakes in the 1950’s. Approximately 10,000, 6 to 8 inch lake sturgeon were stocked in Lower Red Lake annually. To date, we have stocked approximately 90,000 lake sturgeon since 2007.