In 2007, the Red Lake Band received its first of three Tribal Wildlife Grants to assist in restoring lake sturgeon to the Red Lakes and its tributaries.  In the past 9 years, the Red Lake Band cooperatively stocked approximately 90,000-6 inch lake sturgeon.  The Red Lake Band purchases eggs annually for the Rainy River First Nations Tribe which are then transported and incubated by the Genoa National Fish Hatchery in Wisconsin. The eggs are hatched and the newly hatched sturgeon are raised throughout the summer months. In early fall, the fingerlings are tagged, for future identification, and transported to the reservation for release in the Blackduck River. The Red Lake Band used the Blackduck River for our release site because there is a fairly deep estuary where the sturgeon can acclimate before entering Lower Red Lake. These efforts have the potential to reestablish lake sturgeon in the 285,000 acres of the Red Lakes, 187 miles of tributaries upstream, and 70 miles downstream in the Red Lake River where they once existed. 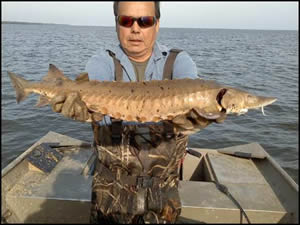 The Red Lake Band is not the only agency working on the restoration of sturgeon in the watershed. The Minnesota Department of Natural Resources, the White Earth Band, and the United States Fish and Wildlife Service have been working cooperatively on restoring this species in other parts of the watershed since 1997. These agencies have a similar goal, which is to restore a reproductively successful population of sturgeon to the Red River watershed. It is anticipated that it may take 20 to 30 years to achieve this goal because female sturgeon do not first spawn until 20 years of age and may live to be over 100 years. 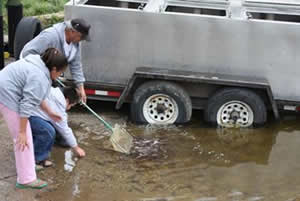 Stocking is only one part of this effort. Restoring fish passage by removing or modifying dams has been a major effort throughout the Red River Basin. In order to fully protect introduced lake sturgeon there is no open angling season for this species throughout the basin. By using a watershed based approach to recovery this species, coupled with a public outreach program, we have increased the likelihood of this effort being successful.